This blog has moved to Wordpress.  This older site will be left up for sometime. However, post entries will stop here.

The new journal is here:

Hope to see you there-
EB 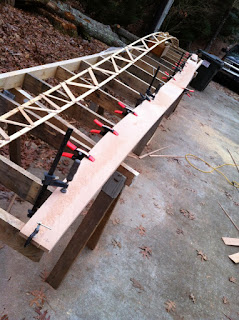 Last week, got the 1/2 hull shellacked.  I decided to add the stems and keel lastly. Stems are cherry. Keel mahogany. Female cardboard station profiles were great for checking for proper lines. Without proper gouges (I've since ordered some), the last sneaking up on the lines took some sanding ... quite a bit. Anyway, now I've a true study model, some inspiration for the real thing and if not, wall art. 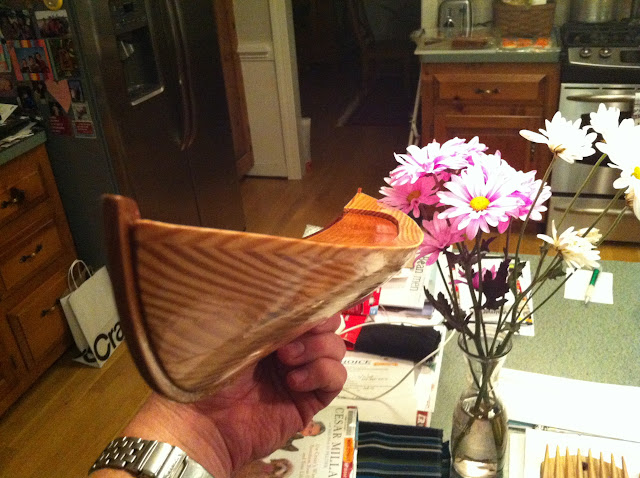 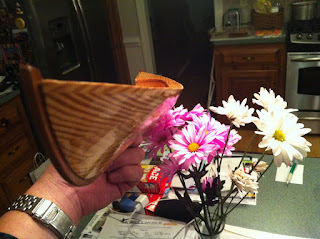 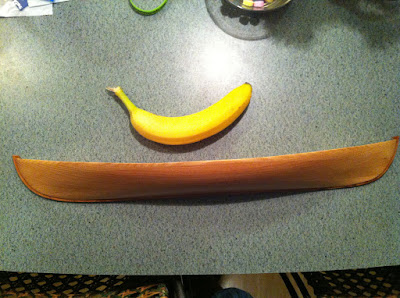 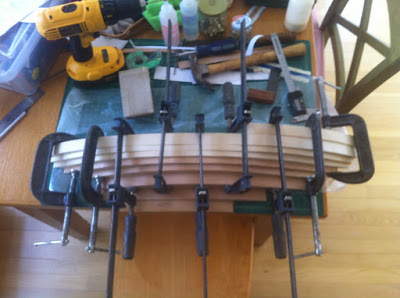 More on another day.

The Shape of Things to Come?

Last October I sailed a boat that I've admired for some time, the Delaware Ducker.  As a child, my family cruised from Norfolk, VA to St. Michaels, MD nearly every summer. I recall on one visit  following my mother across the lawn of the Chesapeake Bay Maritime Museum. It was a grey day and the swollen Miles River edged up into the outbuilding displays. At 11 or 12 years of age, the smaller boats exhibited fascinated me. You could dream of maybe owning one. A drab green punt version of the Ducker must have caught my attention. I'd almost swear to it. This smart skiff exudes adventure easily enticing a little boy's wanderlust. Likely developed from canoe traditions, this light clinker built skiff is perfectly symmetrical fore and aft. The bow is identical to the stern. Long ago very common to the shores south of Philadelphia, hunters employed the craft to chase rail birds in the marsh. An understated beauty from the 1800's , it quickly stuck in my mind when we were reacquainted on a solo cruise maybe 3 years ago. To sail one would be fantastic. The boat looked "right". The chance did present and I was enthralled with the boat's lively performance while sailing and rowing. It seemed like a Laser in disguise. Soon after I purchased plans of the two versions documented best. As a "vernacular" skiff, there are undoubtedly many other variations, but the now known "Greenbriar" and "York" are well documented. Save for 2-3 originals in museums on the East Coast, the hundreds of others have likely dissolved. We can be grateful a few people sought to preserve these simple lines and now those who wish can build a replica, can. No one has promoted the Ducker more than Ben Fuller at the Penobscot Marine Museum. He wrote several articles on the vessel for WoodenBoat while curator at the Mystic Seaport Museum. Ben in fact owns a Greenbriar in his gaggle of small boats. I've read and reread his articles, stared at my photos of the Greenbriar at the in St. Michaels, MD, and lofted both designs in the computer.  Frankly, I've been haunted by the boat for some time. Sailing one may have put me over the edge. Shoot, that may be as good a reason to build one as any.

Doing so may make me officially a sucker for double enders. Seeing this one trailing along in the wake of our Rozinante "Luna" is not a stretch. The design may be a descendant from native American canoes. The construction certainly is reminiscent of them. Or, maybe its salty lines were borrowed from old norse faerings ancestors. Like an Inuit kayak, the Ducker's lines have a strength and beauty derived from practical evolution and the hands of countless builders to present a charm hard to master. Still, there are enough differences in the two plans I possess that I decided to make a study of it. Overlaying the drafts in the computer showed the Greenbriar to be 3" longer, 2" thinner in beam, a fuller bow in section, but slacker bilge amidship. The York likely has more initial stability and resistance to heeling, but the Greenbriar should row and slip through the water more easily with her thinner waist. With paper and balsa, I glued quick models using the stations and elevation for further study.

I canvassed the household for their opinions on which boat was favored. It was a tie. No help there. The York appears more elegantly dainty. The Greenbriar seems quietly confident in her beauty, more of a pony than thoroughbred. Is this a decision? Perhaps, but I've always admired carved half hull models, have wanted one for my office, and have now begun a 1 1/2" scale version of the Greenbriar. Its sides will not be clinker, but rounded even though I doubt I'll build in either carvel or strip.

Note if your model is to be 24" long, make sure the wood or lifts are not 22"! Yeah, now I've wood for a second half hull. Dumb. Consider it material for a future opportunity. That, and heed the "measure twice" adage.  I won't get into the "how to's" of this form of model building. I've proven I may not be reliable there. Many sources are available. Anyway, here are some progress shots of the Greenbriar half hull.

Seems like errors are par for the course today. Lowering the elevation pattern to avoid cutting the keel (will add later with stems) took too much out of the shear. Tunnel vision run amok here. Well, looks like another opportunity. Adding the wood back as deck allowed for illustrating the cockpit.

It is official now. Luna is under wraps for the remaining winter. I bought 3 tarps, six 2x3's and one 2x4 and headed to Mobjack with my big ball of string. The temps started in the teens and warmed to the mid 40's. There was a good breeze with sun. Had the canvas not been removed, we would have gone sailing. After removing the booms, forward hatch and companionway doors, a sturdy framework was fashioned to support the tarps. Coverage was good save for the aft tarp which got sort of bunched. I'll rework that one on my next visit. 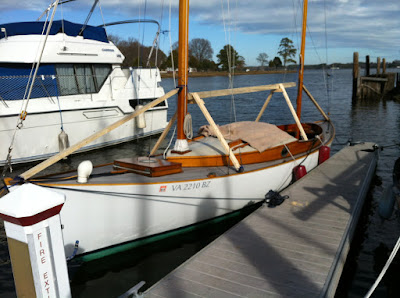 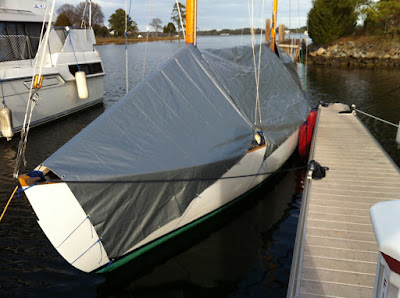 Here are a couple pics of the cabinets and interior I've been fixing. Galley is to port with a single burner butane stove. Chart table is to starboard. Two drawers for the galley. One for the chart table. 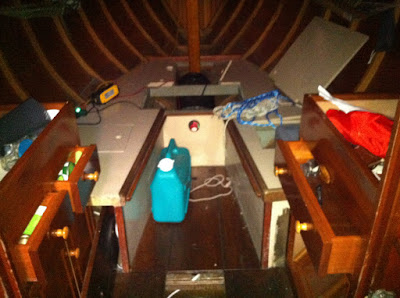 Both have lift off counters made from a chestnut oak tree we dropped in our yard a couple years ago. The rest is mahogany. This greatly improves the old cabinets for storage and efficiency. I may write up more when that project is complete. Here are the counters tops. Fiddles are on 3 sides. there are storage bins all the way outboard. 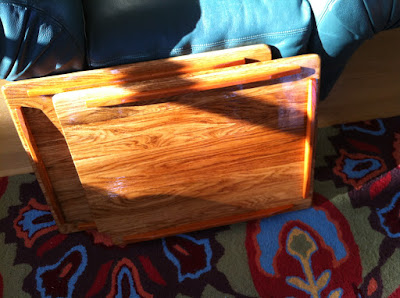 With the boat pieces brought home, there will be plenty of varnish work to get a start on before late March for haul out. That will be here before we know it. Good. It is hard to visit Luna and not go. It is going to be a good year.
Posted by eebe4 at 7:39 PM No comments:

Yesterday I went down to check on Luna and remove her canvass. The temps proved too tempting. T-shirt weather, sun and a stiff breeze. It was awesome. Though now a dream, I hope it sustains until Spring. The scent of water and land, and warmth of the sun are absent here, but you'll get the drift ...

A Life In Wood

I stumbled upon this short film, a gorgeous boat (Falmouth Quay Punt) with the words of her owner and builder. Lovely.

My pal Peter is an avid WoodenBoat reader. I mean from cover to cover. He pointed out an ad in this month's issue for 2016's Small Reach Regatta held each year in Maine. A boat featured there on page 76 is a sweetie. It's UNA, I believe on our first day.We started near last, sailed through the fleet and back and still got to the destination first. Maybe we were the only ones considering it a race. Anyway, I'm glad to see we had proper sail trim. Telltales are streaming aft. Pretty cool. I was told by WB that they would not feature her under their "Launchings" section as she had been in Small Boats Monthly. Well, she snuck in there anyway. Thanks Pogo! 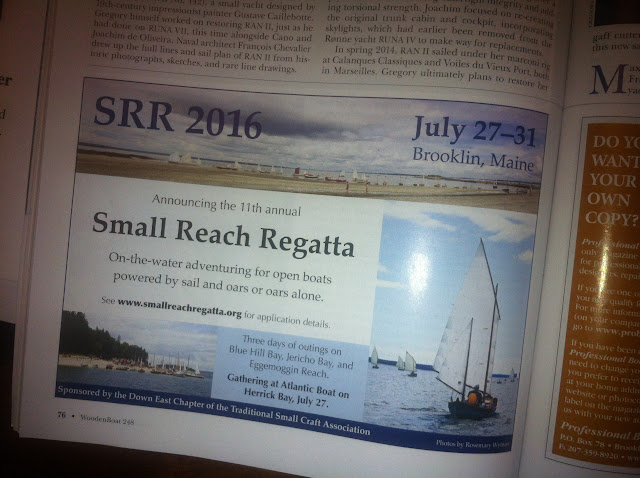 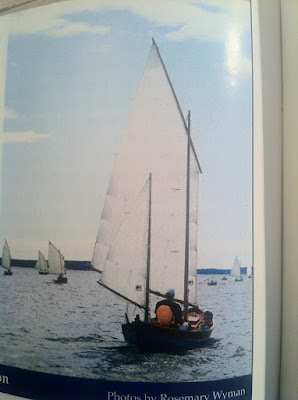